The most wonderful story ever written

The day I met Eduardo Jauregui, one of the co-authors of the children’s books “The most wonderful story ever written”, the weather in Athens was mercifully cool. After a couple of weeks of hot early summer days, the temperature was finally making a much needed drop. So my walk (make that a climb) from the metro station to the Metaixmio editions venue where his book presentation was to take place, didn’t leave me dripping in sweat. Thank weather for small favors.

The place was very nicely set up and I was able to spot some familiar blogger faces in the small gathering. We went through the notions of introducing Eduardo and the book’s translator Cleopatra Eleotriviari and everything was just as any other book presentation has been.

Then nothing was like any other book presentation. It was obvious to the press and the bloggers in the room that we were in the presence of a very charismatic speaker. We were captivated.

How couldn’t we be when he turned the task of speaking for himself and his books into a theatrical presentation and made us laugh out loud numerous times with the shenanigans of his heroes and himself? A presentation filled with funny stories and anecdotes that kept us interested in every thing he said. Such a great talent to have, we were so lucky to witness it and be inspired by it! 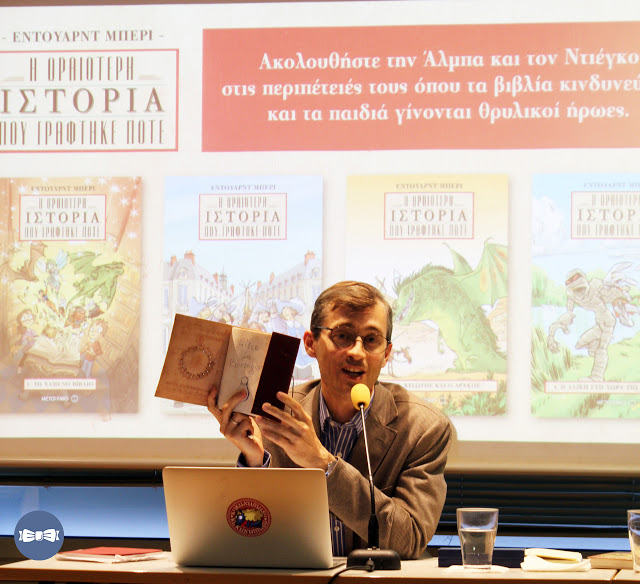 He started off talking about his connection with Greece and the Greek language and made us laugh when he shared that he used to read Oedipus in Greek.

He then showed us his favorite pen, with which the books were written. He has named her Kalliope. He had the manuscript of one of the books with him too. That’s how he prefers to write, with a pen in a notebook. That’s refreshing isn’t it? 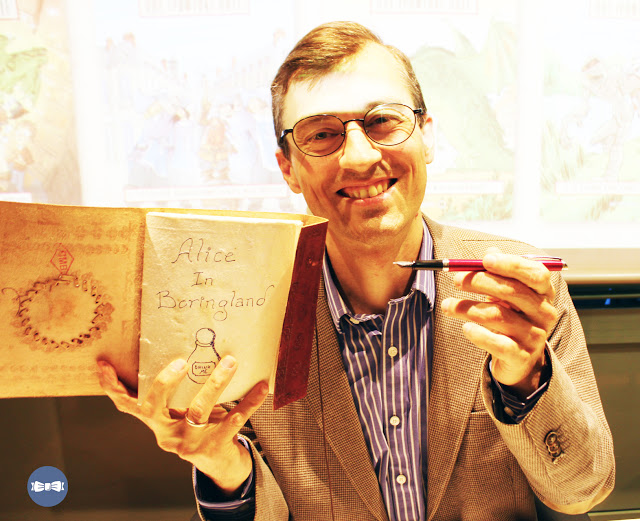 The story of the book series is about a book that contained the most wonderful story ever written. The book goes missing and with it pieces of the most known classic stories go missing too. Well, not exactly missing. They are rather altered in weird ways. Everything takes place around Barcelona and it’s thrilling to see the two main characters of the book Alba and Diego two book loving kids diving (literary) into the books to save them from the bad guy! There is a book store called Abracadabra where the kid’s aunt holds the knowledge of something very important and that’s all you are going to get from me! You really should read the book for the rest! 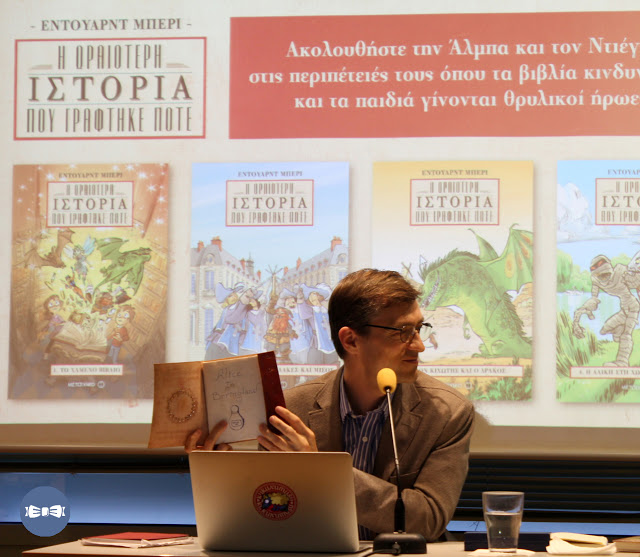 This is a book for kids over the age of 9 years old and when Eduardo was asked about the gorgeous but few illustrations in the book, he yet again slaved us with his response.

-They are expensive, he said to laughs from the audience.

And went on to explain that the famous and talented illustrator Stefano Turconi works with Disney and he has done a truly magnificent job if you observe the historic details he put on the illustrations, but that’s not only it. He believes that giving the reader the space to imagine the story and the looks of the characters by himself, he helps him experience the joy of reading. There is a lot of image influence for the kids these days (meaning the smart devices, monitors, TV, etc). The books should stay authentic in this; they should provoke the wakening of the kids imagination. 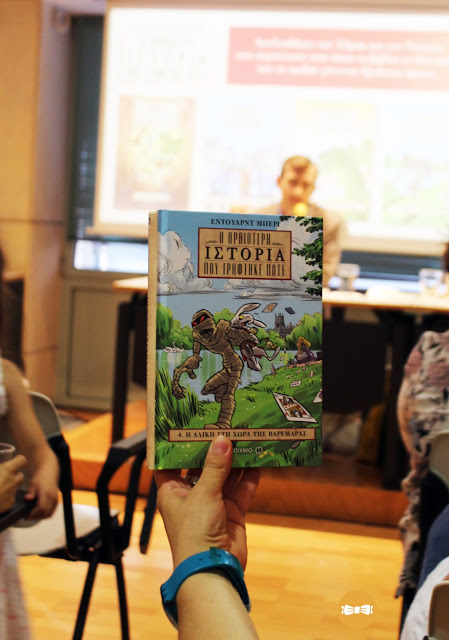 Well who could argue with that?

The think that I marveled the most was how down to earth, friendly and smiling he was. I mean, ok,

the guy has a PhD in laughter for crying out loud (pun intended) but he is a famous writer and psychologist! Nevertheless he not once spoke about himself in any other tone as joking, meaning he doesn’t take himself very seriously if you know what I mean.

You should hear what he answered to my question. I asked him this: In order to write a great book for kids, one should have a great connection with his inner child. But writing books demands discipline. How do you combine the two? 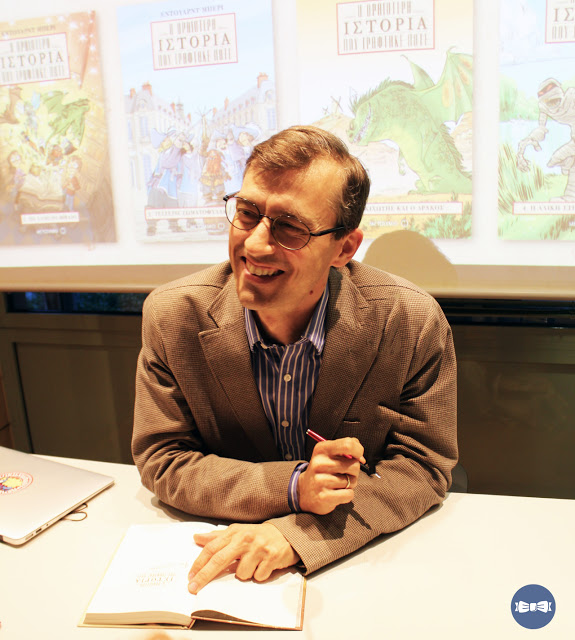 And he said that his mom still thinks he is just a small kid, even though he is the oldest of his siblings. He still feels like a kid and he proves that every time a new Star Wars movie is out. He goes dressed in character! But when it comes to writing, he knows it’s time to work and he concentrates on that, albeit for short periods of time within the day. The other time he prefers to spend with his niece and his friends from the improvisation theater. He was so passionate about that and its benefits I am temped to look one up here in Athens too!

He is a very remarkable person who knows all about nurturing his inner child and helping others find their own! All in all, this was the most inspiring meet-the-author I’ve ever been!

His books are under the name Eduard Berry and he has written them in collaboration with P.D. Baccalario for whom he talks with admiration and friendship.

You can find the first four books of the series in Greek by Metaixmio editions. Enjoy!